This is probably a bit out of date as the Hero2 is now superseded by the Hero3. However, I feel that much of this review could be relevant so I’ll try and keep most of it to the GoPro’s in general and not specific to the Hero2.

With that in mind, I should start off with the facts specific to the Hero2 vs the Hero3. The Hero2 only came in one model, whereas the Hero3 comes in three – white, silver, and black. The Hero2 in equivalent to the white model Hero3. However, the Hero2 lacks no wifi support and has fewer buttons.

Regarding the button interface, that is probably the worst part of the Hero2 – hold the button when turning it on for a smidgen of a second too long, and it will boot into photo mode, from which you’ll need to press the button five times to get to the video mode. Which would be OK if you were stationary, but isn’t so friendly when you’re travelling at 40km/h on a bike.

The second part is battery usage – no one is really sure why, but the camera uses the same amount of battery whether it is recording or not – this sounds like either it has been made that way to prevent any delays when recording starts, or it’s just a case of poor software design. I’d probably lean toward the former, as it seems a product made for professional use rather than consumer friendliness.

Onto that, the video quality is excellent in any mode – however the other side of the coin to this is that there are no low resolution options – hence why I think this is built with professionals in mind – 720p is about the lowest resolution and it is awesome quality, it’s just that the files can be huge sometimes. The latest software updates create low-resolution files alongside the full resolution files with the extension “LRV”, these can be useful for previewing or even quick youtube posts.

High resolution recording is also available, even at 30 frames per second it is very smooth, if you want a higher frame rate, the Hero3 would be the go.

I’ve been running the Hero2 on the bike in different positions for about 6 months and have quite a bit to say about the mounting hardware that comes with the hero and also about how it should be mounted.

The handlebar mount kit from GoPro has some issues – first off, because there are so many joints that there can be movement, and before too long your camera is pointing the wrong way. If you mount it on the rear then the bolts may rub on the inner thighs, which can get uncomfortable after a while.

Furthermore, the plastic arms needed to mount the GoPro will fail, I had mine fail on me after about 20 hours of use:

This is why I’d recommend you make up a tether – it’s pretty easy, create a loop of string, and run it through the hinge on the rear door of the casing. Then loop it around something on the bike 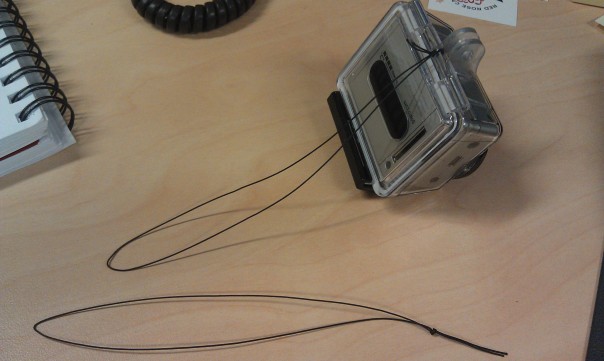 If you are considering mounting the GoPro to the bike, the best option is to get a k-edge mount. They are available for the front (on the handlebars) or the rear (on the saddle rails). Otherwise, you can use the GoPro handlebar mount on the rear as follows, however it does not look as elegant and will become a pain after a while.

The k-edge mount is a little more elegant: 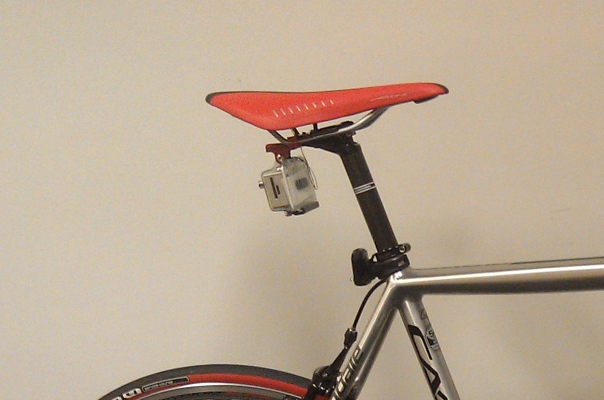 The most stable point to mount a GoPro is on the rear of the bike. This is because it does not move around from side to side as it does on the front, and because most of your weight is normally over the rear wheel it is more stable. I’ve also tried mounting it to the helmet, and for road purposes at least, it is a bit too shaky. I think this may be a better option off road as you’d be spending more time out of the saddle so your body would be absorbing more shock.

The video is great, my favourite settings are 720p at 30 frames per second – the quality is good, the file size reasonable, and most importantly it is easy to edit on an average computer. For editing, anything goes, but if you use iMovie beware that the file size will bloat significantly when importing the movie to quicktime format (or “optimising” as they call it). This is only required if you wish to adjust the frame rate or picture quality.

It’s good to have, as you never know what’s going to happen, here’s some random stuff I’ve captured on it:

Note that the viewing can be a bit choppy when helmet or bar mounted: