Michelin have had their pro range of tyres around for quite a while and it seems that (at least according to reputation) that they get better with every iteration. The Pro4 is the first tyre I’ve tried from their range, but I know many riders who run on the Pro3’s with no complaints.

I wasn’t expecting much, as I’ve been very happy with the Continental GP4000s’s, these were purchased on a whim, as these were on sale at the time and I was looking for something that would add a bit of colour to the ride.

The quality is great – the tread runs straight, the markings are clean and clear. There doesn’t appear to be any irregularities throughout the length of the tyre.

The colour is in the right place. Many other brands have the coloured section of the tyre contacting the road, which means it gets dirty in no time. The colour on the Pro4’s is restricted to the sidewalls. However this does not mean they won’t get dirty – it will just take longer. The colour is on the inside too – this was real helpful in finding punctures.

The grip is excellent. Around corners, and especially on rough, coarse, and loose surfaces it is predictable – no skipping or hopping like the Conti’s did. I think this is related to the profile of the tyre. Most tyres, including the continentals, and pretty even in tread distribution, so that the final profile when inflated is rounded. The Pro4’s however, place more rubber in the middle of the tyre, so that the profile is more diamond shaped – this means that it is flatter on the sides, which equals more rubber on the road around corners.

The rubber compound is also something worth mentioning. Whilst it does contain silica it feels similar to the black chilli compound on the GP4000s, perhaps a bit more sticky. And they seem much more predictable in the wet, especially on painted surfaces, where the GP4000s felt like you were riding on ice, these give a bit more feedback.

The construction of the tyre is top class – 3 layers of rubber, , and from what I can tell, a nylon carcass. The sturdy construction means you won’t expect (m)any punctures in the first 1500km or so, however as the tyre wears it will start to pick up fragments of glass, metal fragments, flints etc from the road, mainly due to the sticky compound. In 4 weeks I had 9 punctures and I found all of them were from items that became deeply embedded in the tyres and worked their way through to the inner tube.

From a wear perspective, you could expect about 3,000km from a tyre, which is pretty much the same as any other tyre you could purchase at that level.  The weight is comparable to top tyres, being around the 300 gram mark they are pretty impressive.

Overall, they look great, have the right rubber in the right places, and offer excellent grip. As a racing or training tyre I think these are excellent, as an all-purpose tyre they are perhaps too sticky so punctures could be a problem.

The GP4000s’s are a staple amongst road cyclists, mainly due to the affordable price range, great puncture protection, and light weight. They are also rated as the best by tour magazine, though this magazine is renowned for preferring German brands anyway.

And on that note, this tyre is still made in Germany, unlike many other european brands, which have moved their manufacturing to Asia. The quality of the tyre is generally good, though I personally have had one tyre fail on me after about 500km. 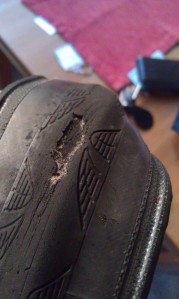 The tyre is touted by Continental as advantageous to its competitors for two reasons, their “black chilli” rubber compound, and the low resistance construction.

First of all, the “black chilli” compound is a good compound, but it’s not great. The advantages are that it is rubber-based, not silicone, so it sticks to the road pretty well in the dry and doesn’t pick up every single piece of road debris. The disadvantages are that it wears pretty quickly, I only get about 2000km out of a tyre, and doesn’t grip too well on some surfaces when wet.

Secondly, the low resistance construction. They don’t provide a lot of information on this, but from seeing how the tyre is made, there is a layer of rubber on the outside, then a layer of silk (real or synthetic, I don’t know), then the breaker and finally the casing. This layer of silk, I think, spreads the amount of deformation to the outer layer of rubber, instead of deforming the entire tyre casing and all, which I think uses less energy, leading to lower resistance.

However, many feel that the tyre has a “dead” feeling. I think this is probably related to the construction, in that if only part of the tyre is deforming, there is possibly less absorption of road surface vibration, bumps, etc.

The tyre has a few other advantages not touted so much by the manufacturer.

Firstly, the puncture protection is excellent – I’ve had wear some tyres out on me without even bearing a puncture, and that’s with everyday commuting, training rides, and the occasional race.

The second is the light weight – they’re not the lightest, but at under 300g, with puncture protection, a good amount of rubber and so forth, it’s a lot of bang for your buck.

They also look pretty good, with the pseudo tread pattern along the sides and silver lettering. And they sound good, especially on a well sealed road they just hum along, they make a nice little ‘tssssss’ sound.

I’ve found that they don’t feel much different at 120psi then they do at 100psi, so just run them at 120psi or get a different tyre if you’re looking for something more comfortable, as noted above they do not soak up much of the road vibration.

This is a tyre that you could use for racing, training, and (given you can afford to replace them every 3 months or so) commuting. However, wet weather grip can be an issue, and the ride may not be as smooth cas some other tyres. But, for the weight and the price, you cannot do much better.